At Seaside Pearl, our wine names have meaning!

At Seaside Pearl, we create wines we enjoy drinking to enrich every occasion – wines to be enjoyed with good friends.

When it came time to name our line of wines, we just kept coming back to Mount Lehman’s historic charm and deep agricultural history.  Our consultations with local historians and long-time residents led us towards names that are rich with the settlement stories of the pioneers and early settlers in Mount Lehman That one of the world’s most beautiful places is concentrated here seems almost unfair.

There is a story behind every bottle of wine, and every wine name. We soon discovered that names inspired by Mount Lehman’s history really work for our wines and embody Seaside Pearl and our love of this beautiful place.  We loved the symbolism of the pioneering spirit combined with the beauty and peaceful ambience of this tranquil environment.

We at Seaside Pearl look forward to welcoming you, or indeed, welcoming you back, to this beautiful location that we call home. We are committed to providing you with an experience that is richly satisfying.

Landing Road is inspired by one of the scenic roads that wander through the Fraser Valley’s stunning Wine Country. Early settler Sam Lehman built a network of trails surrounded by rich farmland. The trail leading from the wharf at Lehman’s Landing to the farming settlement was called Landing Road. Surrounded by rolling fields, flowers, and trees, the quiet country road was open for vehicular traffic until 1950.
When our Landing Road hits your palate you will find rich flavours of chocolate, blackberry and gentle oak. Pair this luscious, tasty red with duck, herb crusted lamb chops, beef and pork roasts or mushroom and grain based dishes. The blend is 65 % Cabernet Sauvignon, 23% Merlot, 12% Cabernet Franc, all sourced from premium growers in the South Okanagan. 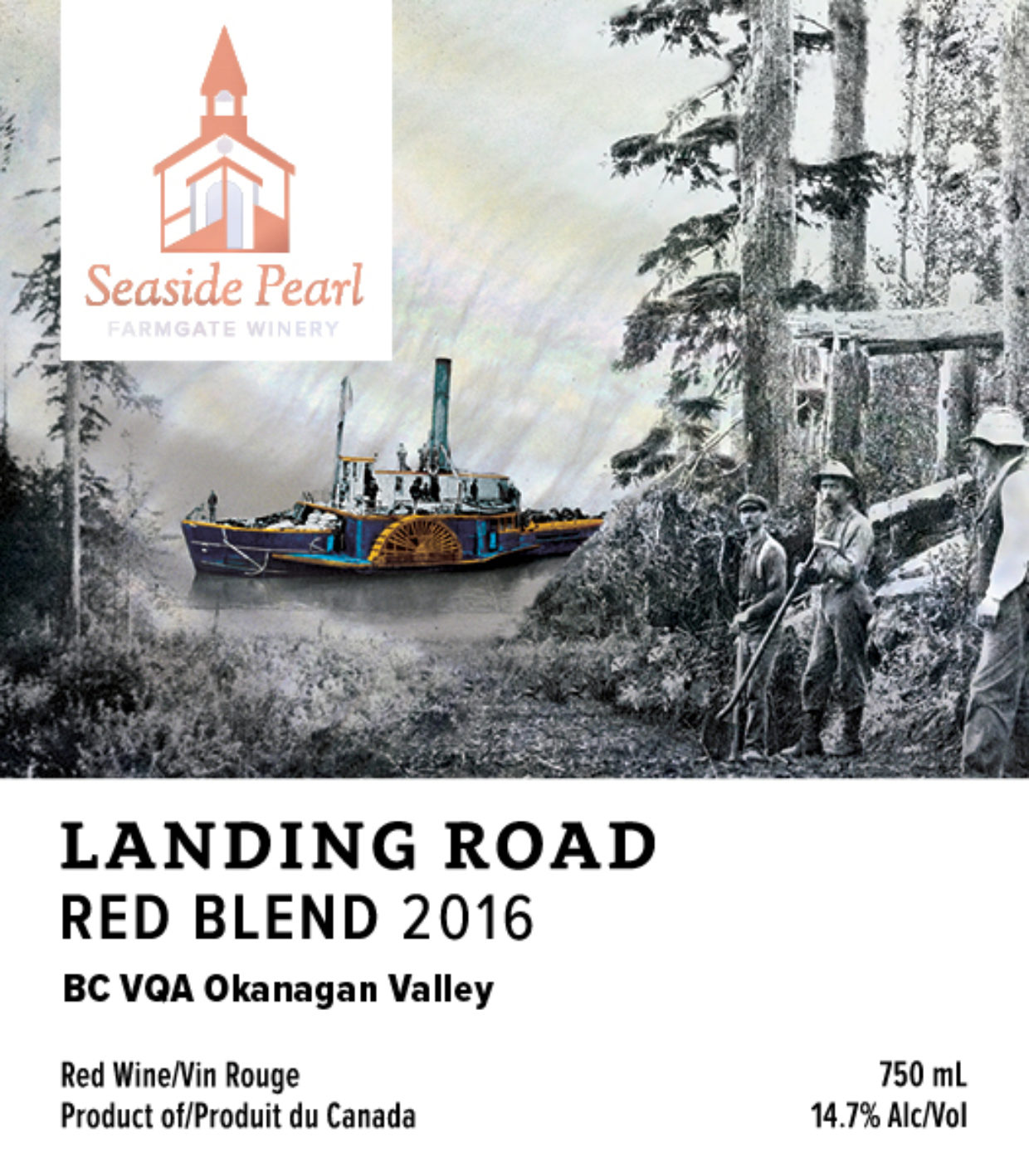 Released with great excitement, Royal Engineers Reserve Petit Verdot was named after the Royal Engineers, the tiny military force that served during the Fraser Canyon Gold Rush. With their splendid scarlet jackets, the 220 men of the Royal Engineers, commonly known as “Sappers” laid the foundation for much of British Columbia by building roads, producing maps, surveying land and settling miner’s disputes. In 1864, Royal Engineer Alben Hawkins arrived to survey the area now called Mount Lehman and took up residence on the bluff above the southern bank of the Fraser River.

The Secret to Growing Petit Verdot: Long days and Lots of Sun!

We seized the day when presented with an opportunity to create a tasty and expressive wine. The extended growing conditions and warm Okanagan weather gives Royal Engineer Petit Verdot a chance to completely mature and shine front and center. 2014 was a truly great vintage and afforded us the chance to produce this stunning Petit Verdot.  It’s just plain delicious!

Supple tannins and American Oak remain in the background, providing structure without interfering with the luscious, elegant flavors. The wine is long, enticing, alluring, concentrated, textural and complex… simply delicious! Aged for 18 months and already reflecting its beautiful heritage. 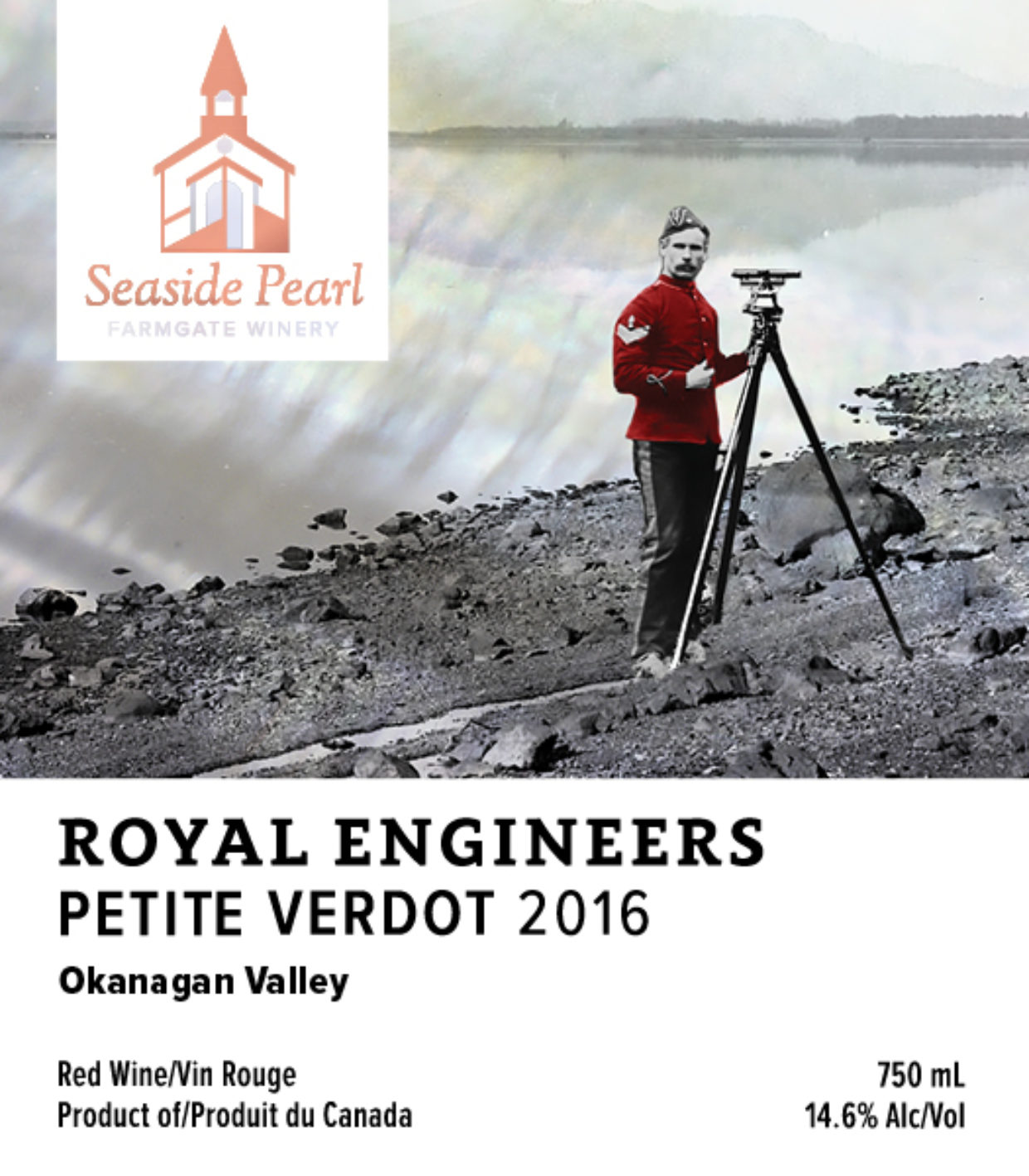 The Old Yale Road is a historic early wagon road that serviced the Fraser Valley. The road provided the only overland, road route up the Fraser Valley south of the Fraser River. Today, Yale Road running east is a heritage site called the “Old Yale Wagon Road.” Known fondly by locals as “Lovers Lane,” lovers of all ages meet and take romantic walks along Old Yale Wagon Road. Seaside Pearl’s Lovers’ Lane Petit Milo is sure to impress your sweetheart. 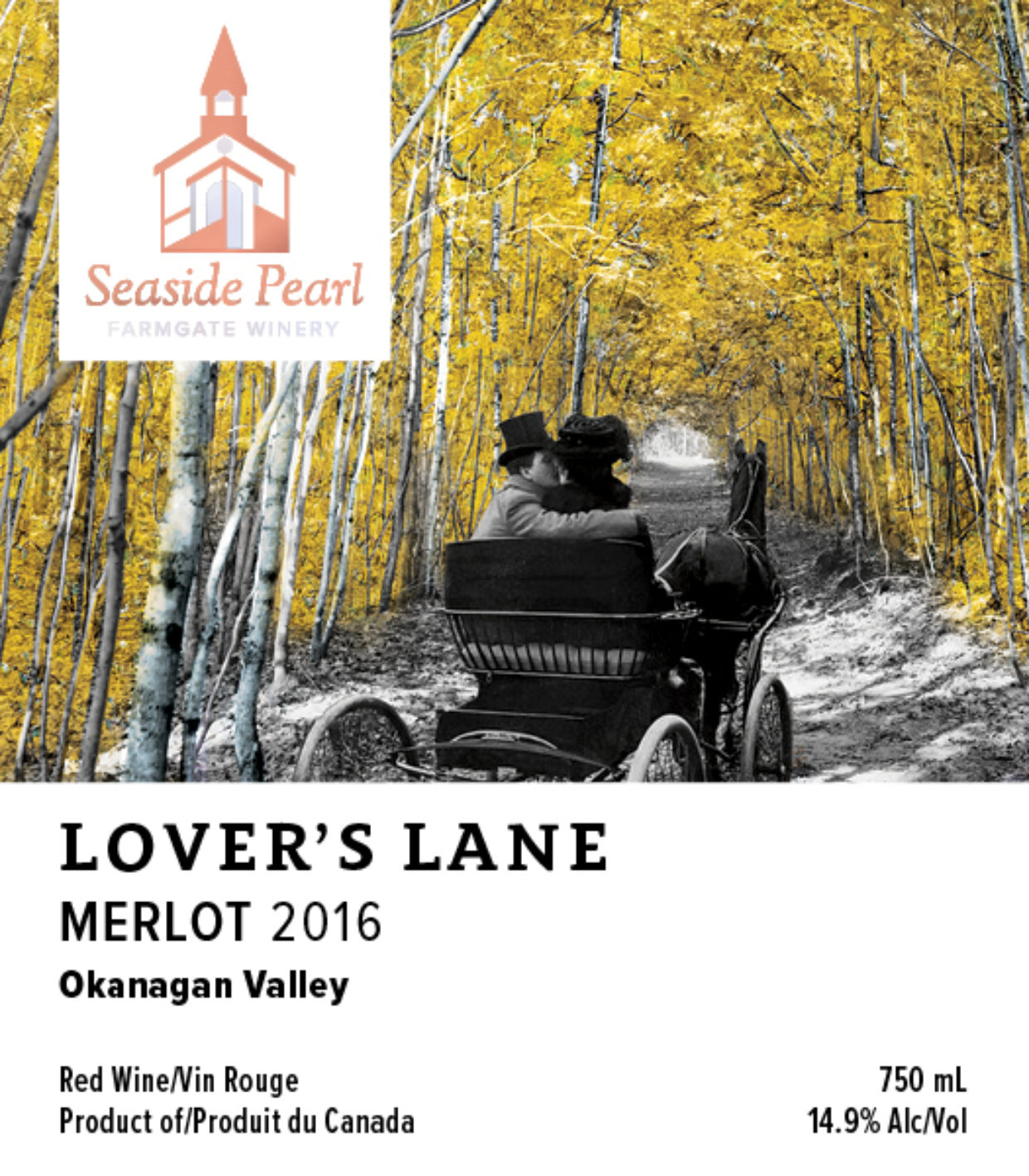 A classic expression of Cabernet Franc with aromas of mint, violet and black cherry, excellent balance and elegance with a strawberry and black currant finish and a hint of French Oak. Sourced from the Herrera Family Vineyard in Keremeos, BC. 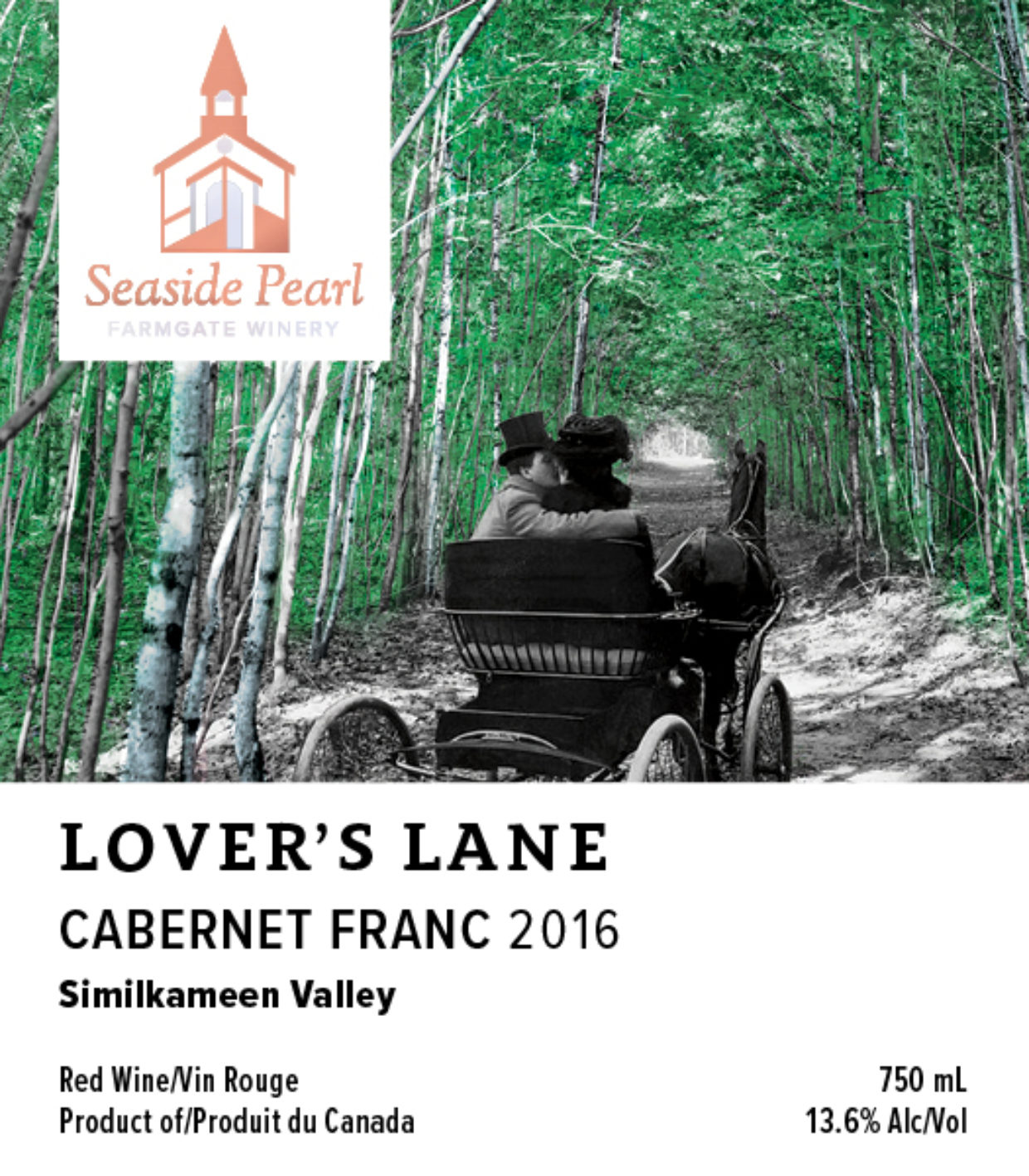 The Old Yale Road is a historic early wagon road that serviced the Fraser Valley. The road provided the only overland, road route up the Fraser Valley south of the Fraser River. Today, Yale Road running east is a heritage site called the “Old Yale Wagon Road.” Known fondly by locals as “Lovers Lane,” lovers of all ages meet and take romantic walks along Old Yale Wagon Road. Seaside Pearl’s Lovers’ Lane is sure to impress your sweetheart. 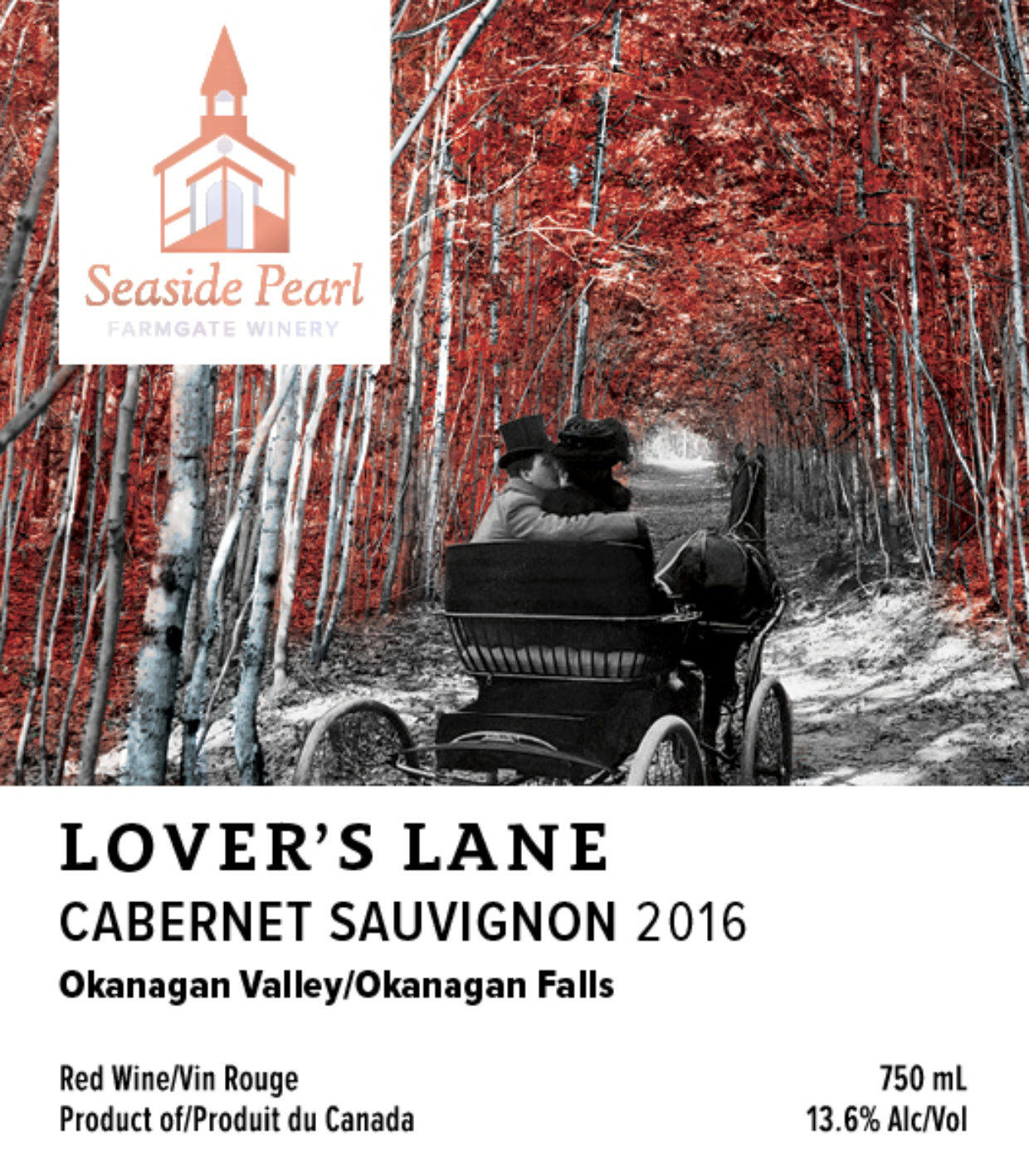 The British Columbia Electric Railway was an historic railway that linked Chilliwack to Vancouver through Mt. Lehman. In 1910, the south side of the Fraser was connected to Vancouver by the B.C. Electric “Interurban” railway. With the arrival of the rail, valley communities became less dependent on the Fraser’s paddle-wheelers to take their milk and produce to market in New Westminster. Fondly known as the “milk run,” the “interurban” provided service twice daily throughout the valley until 1952. All aboard!

An intensely flavoured and full bodied red wine with a characteristic of smoke, earth and meaty notes. Try pairing with pepper steak, sausages and blue cheese. 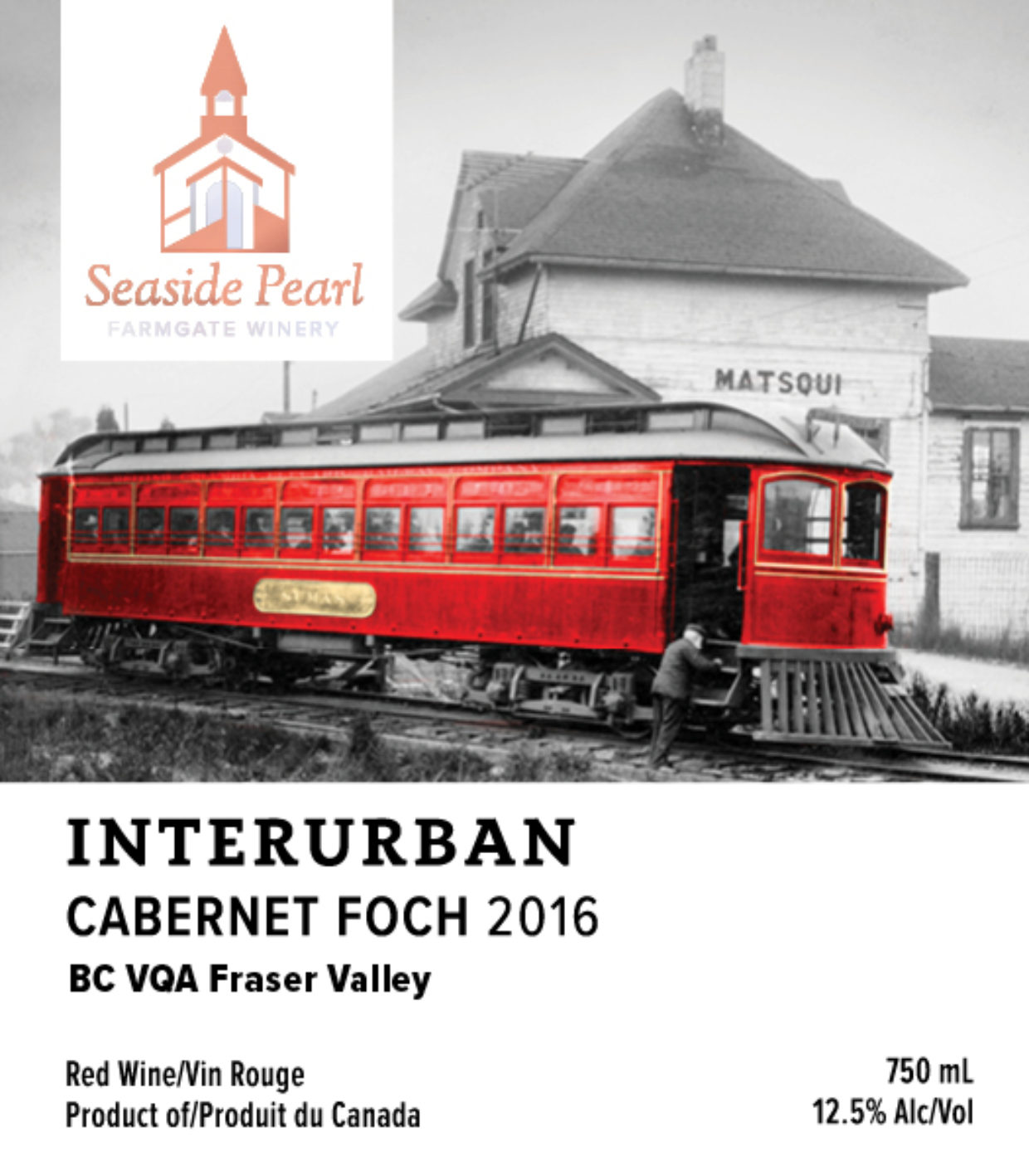 Every Spring city dwellers descend to the Bradner Daffodil Festival to talk flowers and bees. Florence’s bee apiary is named after Florence who lived in the Mount Lehman area most of her life. Florence kept bees on her farm where she lived with an old black Labrador dog and a cow that she kept in the pasture. The apiary has been passed along from the best beekeeper to the best beekeepers for over 100 years. The distinctive flavor of the “Heavenly Honey” produced on the aviary comes from Florence’s blend of crops, wildflowers and trees, and the faint greenish tinge which came from the early spring maple flow. 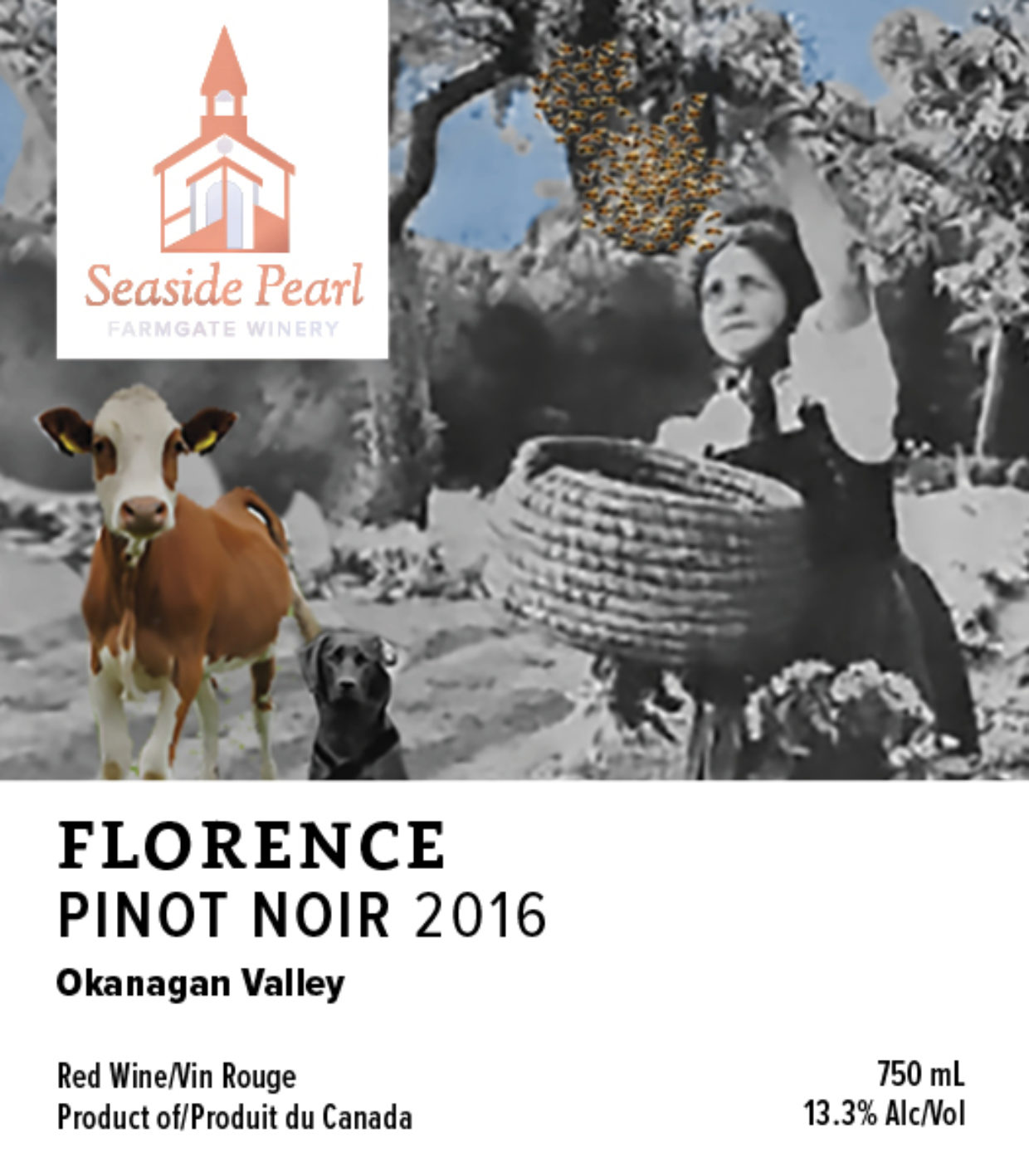 The Lehman name originates from pioneer settlers Sam and Isaac Lehman. With a combination of instinct and pluck, the two cousins arrived on the banks of the Fraser River by riverboat in 1875, just after Royal Engineer, Albin Hawkins. They encountered a beautiful landscape with fertile soils and abundant water and forests and were smitten by the beauty and grandeur of this part of the world. Sam and Isaac set out to start a new life make their fortunes amongst Mount Lehman’s emerald fields and gorgeous surroundings. They helped build a wharf for riverboats and log the area for farming which brought many more settlers to Mount Lehman. The Lehman name proudly lives on in honour of Sam and Isaac.

Seaside Pearl’s Sam and Isaac is a lovely dry white wine is clean, alluring and focused with loads of personality and a silken mouthfeel. Captivating and salivatingly delicious, this is a zesty white wine that is as refreshing as a cold glass of lemonade on a hot summer’s day. On the palate, Sam and Isaac have a luscious texture with flavours of green apple, citrus and melon. This is an uber-delicious wine to enjoy in its vibrant youth!

“ Sam and Isaac a lovely dry white wine is clean, alluring and focused with loads of personality and a silken mouthfeel.” 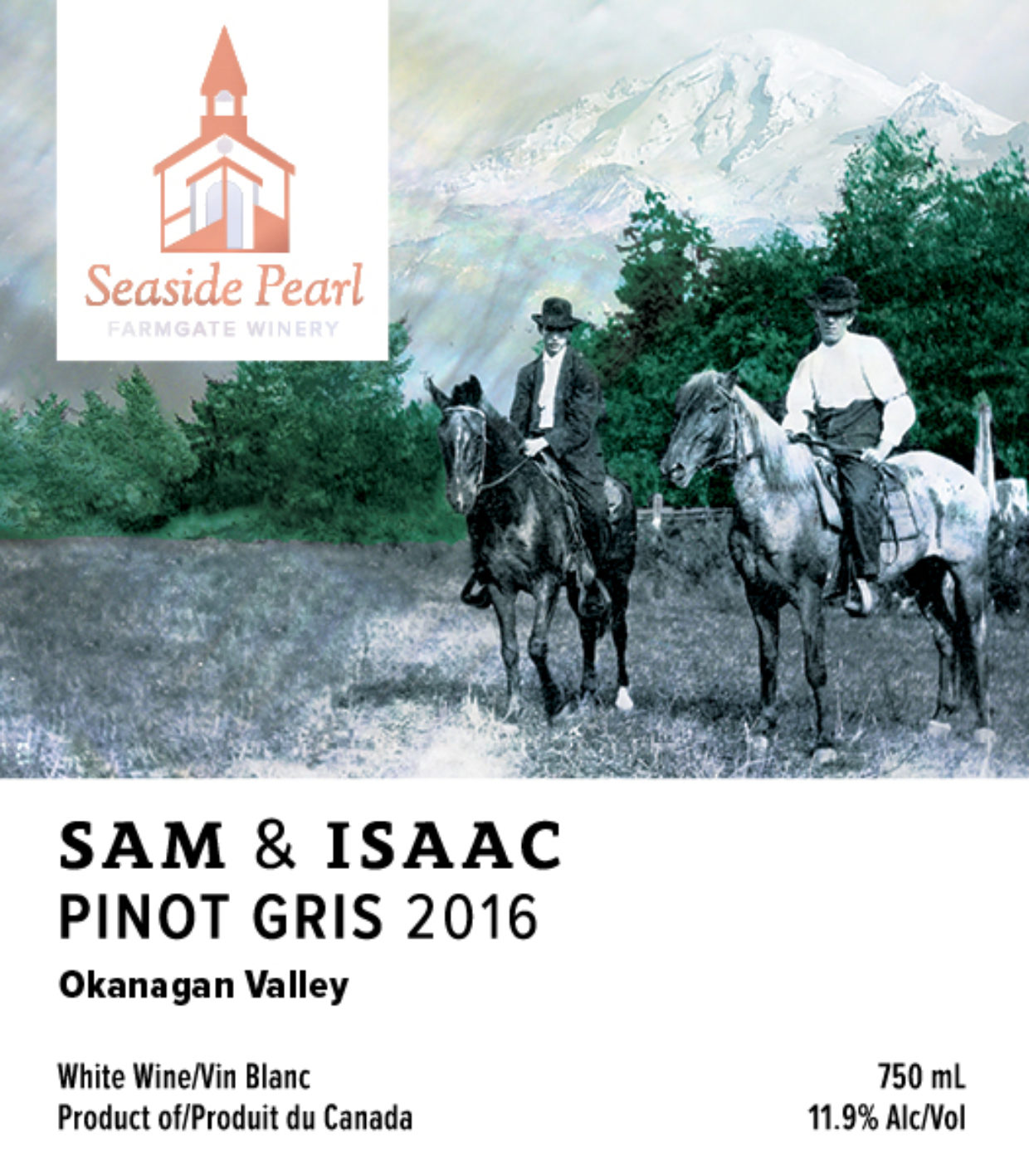 The Fraser River Gold Rush was one of the most exciting historical events in British Columbia. It brought thousands of prospectors, adventurers, outfitters, speculators and land agents from around the world. When news of the Fraser Gold Rush reached London, the Royal Engineers were sent to control the sudden influx of unruly prospectors.

A delightful example of a fruit-driven Chardonnay from a classic wine vintage. Unoaked and lightly golden in colour, richly textured and concentrated with balanced acidity that drives a lingering finish. A wine to be enjoyed over the next 2-3 years. 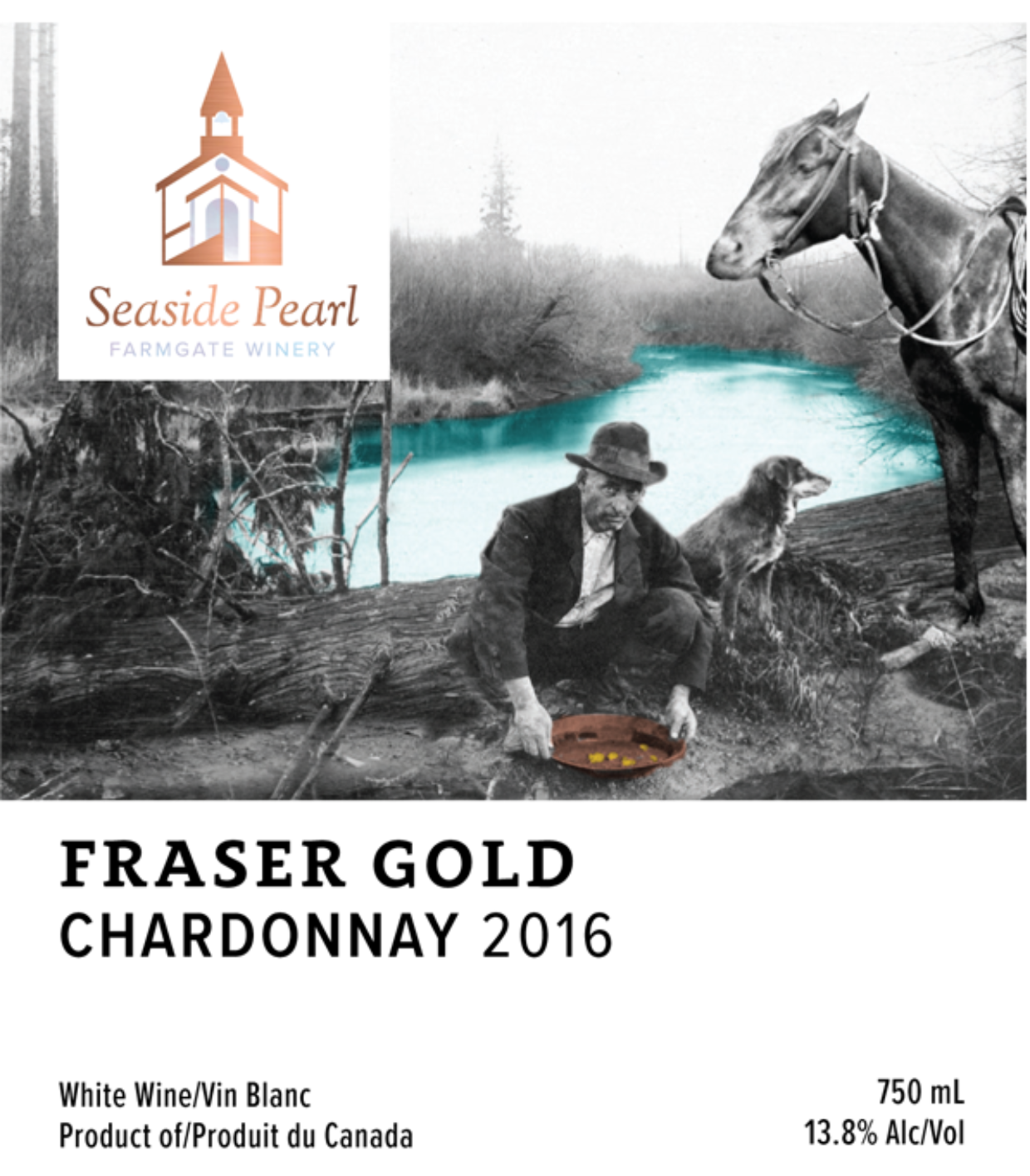 In 1914, English horticulturist Fenwick Fatkin and his wife Charlotte settled in the Mount Lehman area, after moving from Vancouver. It was springtime when Fenwick noticed a daffodil field out the window while riding a train through Bradner. They loved the area, because of its rich soil, and perfect daffodil growing climate. In 1928, Fatkin wanted other local growers to showcase their daffodils, and decided to “make this a second Holland, and honour his wife Charlotte. This was the humble beginning of the famous annual Flower Show.  Charlotte’s family is involved in the show to this day, with granddaughter Pauline serving as co-chair of the show.

Charlotte is a unique wine made from Petit Milo grapes, specifically cultivated for cool climate wine growing regions like the Fraser Valley. Light and deft, this wine is clean and elegant with honey and citrus notes on the palate, finishing with tropical aromas of guava and pineapple. Grown locally, made locally and proud of it, we are very proud to present the fruit of our land. 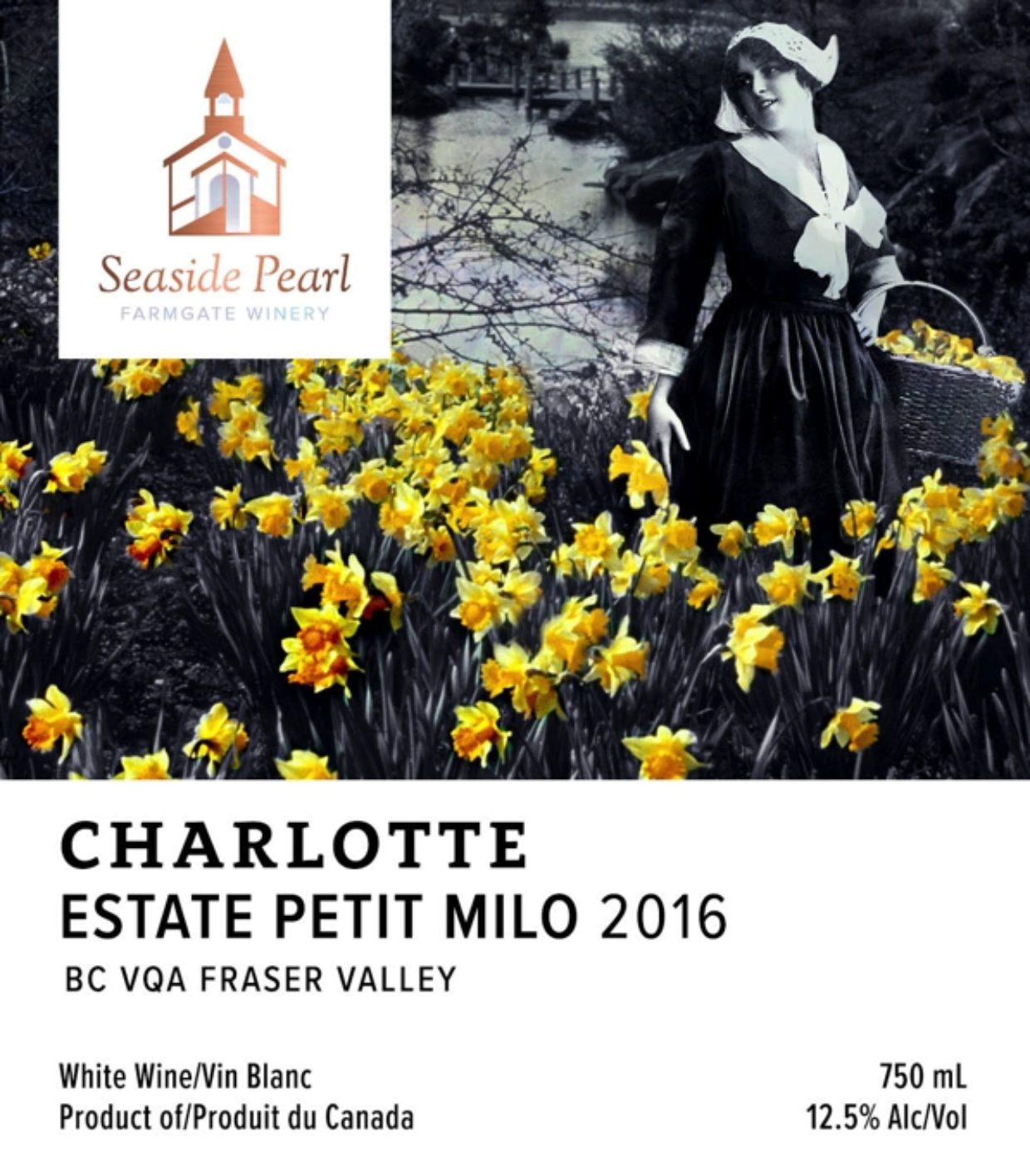 Seaside Pearl’s Daffodils sparkling wine is made from 100% estate grown aromatic white wine grapes lovingly drenched by the Okanagan sun. Back in 1914 when horticulturist Fenwick Fatkin and his wife Charlotte settled in Bradner, just west of Mount Lehman, they noticed how well daffodils grew in the fertile soil. Bradner is celebrated for its annual show of field grown blooms, particularly daffodils and has the distinction of being the “Daffodil Capital of Canada.”

Daffodils Sparkling achieves ripeness in the grapes without acquiring excessive sugars (and maintaining sharp acidity, the backbone of a great bubbly. The nose displays aromas of peach and citrus and spicy floral notes, which combine with the crisp effervescence and off-dry palate to make this wine incredibly versatile. This wine possesses a beautiful ruby/pink jewel like color and playful soft red fruit that dances with the refreshing acidity. A delicious blend of Muscat, Viognier and Pinot Gris 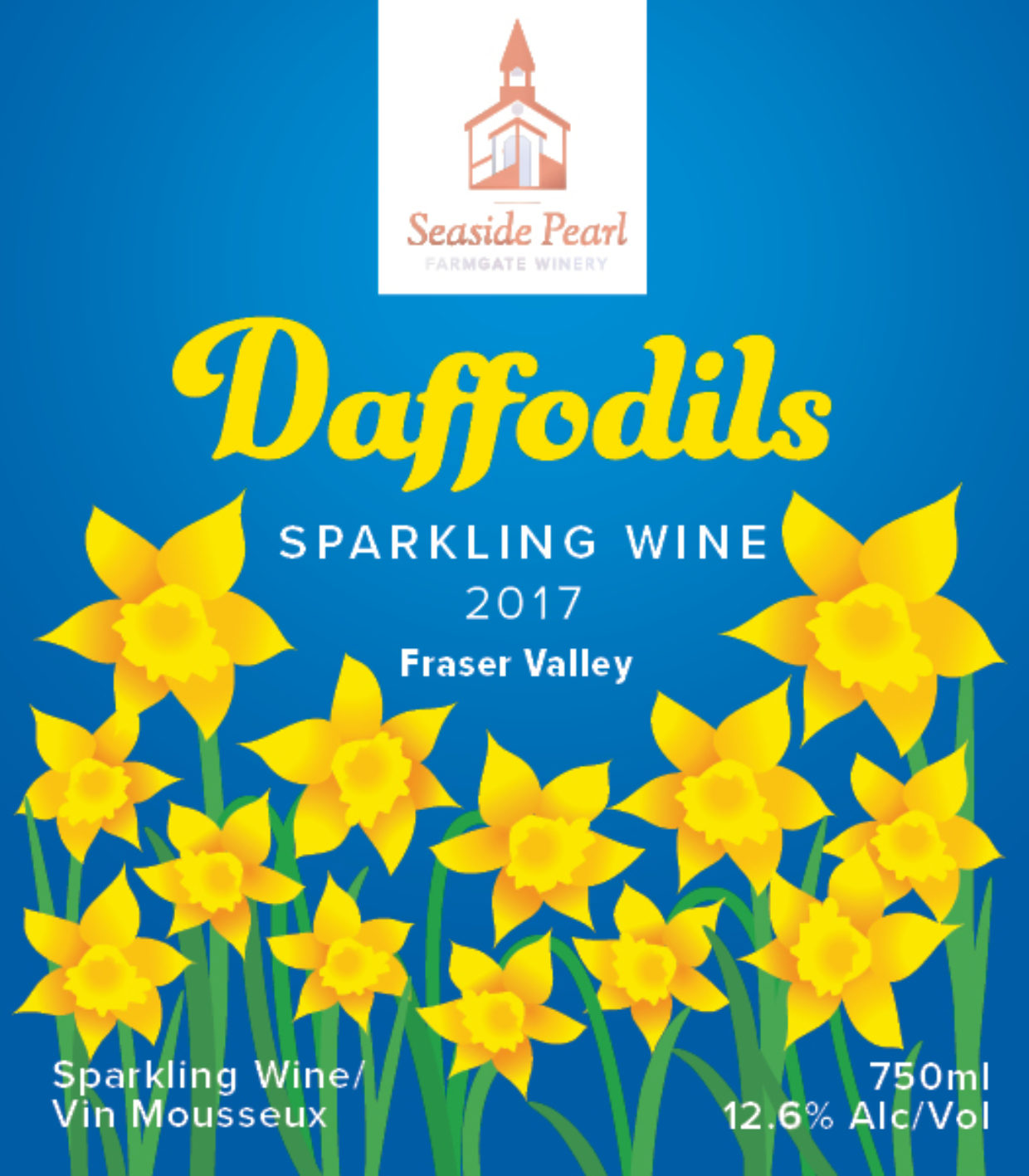 In Mount Lehman the gorgeous magnolias that grace the parks and gardens herald the arrival of spring. Magnolias are one of the loveliest and most impressive flowers that erupt in a fragrant and dazzling floral spectacle. A mature magnolia in full bloom is a breathtaking sight. Spring flowering magnolias have wonderful silky buds that are a reminder of the wonders to come.

John Cunningham Maclure was one of 167 Royal Engineers (Sappers) sent to British Columbia in 1858 to build roads and bridges and to exert a strong British presence to control the sudden influx of unruly prospectors during the Fraser River gold rush. Invited to settle in the area following his service with the Crown, John chose beautiful and serene Matsqui Prairie. When John first laid eyes on the Matsqui Prairie, he reportedly said, “This is the promised land”.

Matsqui derives from the local First Nation language halq’emeylem and means a “stretch of higher ground.”  On Matsqui Prairie, you’ll find many grassy areas between the Fraser lush river valley and dike where you can sit and be lulled by the rhythm of the river. 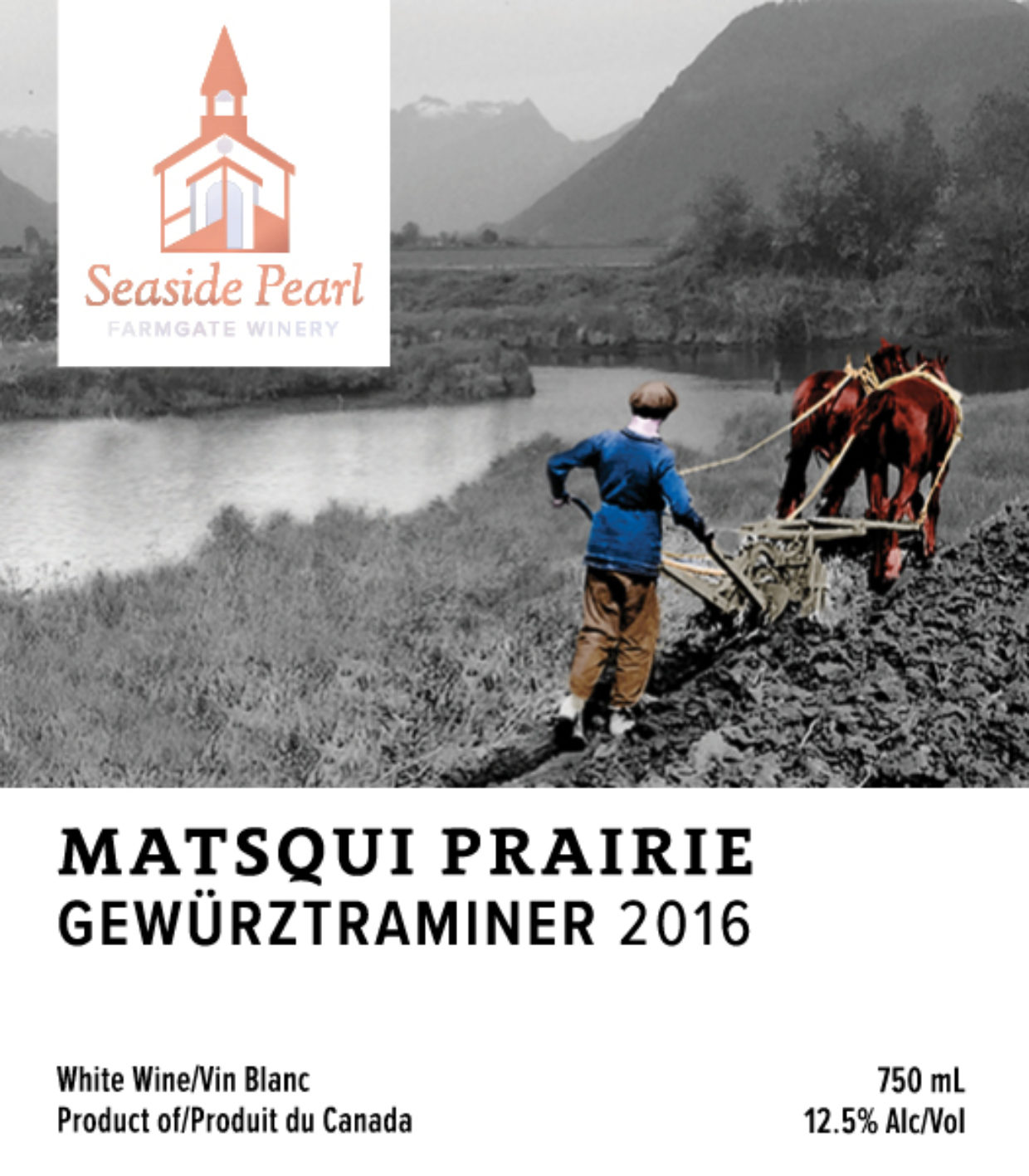